It’s been a little more than a week since I made the mad dash across the Newark Airport!  Things around here are a little crazy with the ongoing Fresher’s Week activities.

Here’s quick summary of my Fresher’s Week so far!

Every night the student union (which has 6 bars) hosts a huge events for students.  The first night, Saturday, I went to the Big Cheese.  The Big Cheese is basically a High School-eque dance with horrible throw-back music.  I can see the draw… but most of the songs made me cringe and think about being back in the sweaty Rotunda at LHS.  Sunday night was better.  I went out with a few friends to the Underground (basement of the Student Union) to listen to two indie bands.  They were actually pretty good and the venue was pretty neat.

Monday night I was lame and decided to stay into to laundry/skype a few friends from home.

Tuesday morning, my dad left and I was on my own.  I felt a little weird realising that I was on the other side of the ocean and in a new country completely by myself.  But, I do have to admit, I like the feeling of complete independence and self-sufficient skills I am developing.  I am actually able to navigate the city quite well now and can get to almost anywhere on foot.

View of the Grassmarket from the second story terrace.

At 9:30 AM, I had the school meeting for History, Classics, and Archaeology as well as my subject meeting for History.  I met a few of the head professors and listened to them talk about the school and the different classes that are offered.  (Fun Fact: They told us that Marcus Mumford of Mumford and Sons actually wrote most of their first album while studying Classics here at Edinburgh!)

That afternoon, I had wanted to climb Arthur’s Seat on one of the guided tours that the University offers.  Unfortunately, all the tours had been booked full for the day. (I have been really bad about getting to the ticket booth on time/have meetings to where I can’t get to the booth, so I have not been able to go on many of the guided tours.) This was the third time I had tried to go on a hiking tour – so I was getting a little frustrated.  Still wanting to go hiking, I decided to walk to Calton Hill on the east side of Princes Street.  Calton is modeled after a Greek Acropolis and had many famous monuments to Scottish writers, poets, politicians, and soldiers.  It also has a great view over New Town with the Castle in the distance.

Calton was also near to the John Lewis store, which I needed to go back to purchase cutlery and some plates.  I had tried to make a PB&J sandwich earlier, only to realise that I didn’t have a knife.  I had to use the edge of my student ID card…

Wednesday morning, I met with my personal tutor to select my classes for the year.  I have a compulsory Archaeology class, but I got to choose my other two classes.  This semester I will be taking British Society from 1650 – 1800 and The Human Skeleton: Death in Forensic Anthropology and Archaeology.  I am especially excited for the Osteology class – on the tour in June I got to see the bone lab and it looked fantastic!  Here at the University we have bones dating from the Iron Age!

From there I went to the Activities Fair where I joined the History Society, Archaeology Society, Student Radio Station, and spoke with Cross Country, Hillwalking, and Rowing.

I missed the guided tour up Arthur’s Seat again.  Walking home, I decided “eff it, I don’t need a guided tour. I’m going to run up the mountain on my own.”  Typical American.

It was a great run and Holyrood Park wonderful!  I ran the perimeter of the park first, the neatest part was stumbling upon St. Anthony’s Chapel.  Built prior to 1426, St. Anthony’s was the place that people with skin conditions went to for healing.  There wasn’t that much left of the structure except for one wall with a doorway which you can see below.  It was still amazing though!  Just going on a run and I find a medieval chapel!  I could see the the top peak of Arthur’s Seat from the Chapel and decided to just go up now.  The air was great the trails in Holyrood Park are some of the best I have ever run on.

St. Anthony’s in the distance. I saw it and had to run up.

The only remaining wall of St. Anthony’s.

I finally make it to the top of Arthur’s Seat (823 feet!) and the view is spectacular.  Edinburgh is actually quite a large city – but walking around it doesn’t really feel that big.  Climbing back down, I ran back to my dorm.  When I got back, my house was having a BBQ. 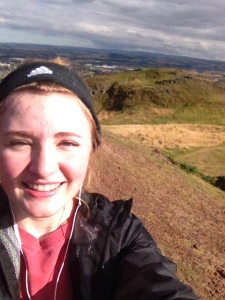 That evening I went out again with some friends to a neat pub off campus called the Pear Tree.  It had a great atmosphere!  It was your typical Scottish pub with hardwood walls and a beautifully carved bar.

This morning, I got up and walked to pick up my Biometrics from the Post Office, they were super busy so I had to schedule an appointment for Tuesday.  Walking home, I got caught in downpour.  I quickly found a close (covered alley-way) to wait out the worst of it and then made a break for the nearest cafe to wait out the rest.

I’m back home now and still deciding what to do tonight.  All in all, I cannot be happier with my decision to move here.  I am super excited to start my studies.

3 thoughts on “You’re not in Kansas Anymore”