Sorry, Mom, for the lack of updates.  I haven’t done a lot this week.

Unless you count catching a cold… which I wouldn’t.

But, let’s see.  It’s Wednesday.  I had my 9 AM Modern Scottish History Tutorial, we talked about ‘Why there wasn’t a revolution in Scotland during the same period as the French Revolution.’ I just had my Archaeology lecture on the transition between the Mesolithic and the Neolithic in Scotland.

Going back, I went climbing at Bowden Doors (near Belford) on Sunday.  Bowden is in Northumbria (Northeast coast of England).  It was a really great day out, the weather was fantastic and super sunny.  (It was actually a little concerning because it’s October.  I also just want it to snow right now so I can listen to Christmas music without judgement.) Driving down, we took the A1 along the coast.  It was really pretty.  It reminded me a lot of driving Highway 1 in California.

And I know I’ve said this a lot but, I’m so glad that I picked up climbing over here.  It has been a sorely needed change from the overly demanding/committing sport schedule I had growing up (which I really enjoyed but got super burned out on).  It’s nice being able to get and get a nice workout in but also get to enjoy going to cool places.

Speaking of cool places, from the top off of the climbs you could see Lindisfarne and Bamburgh Castle.  Lindisfarne was known as the ‘Holy Island’ during the medieval period and was basically the English equivalent to Scotland’s Iona.  It was also the site of the first Viking raid (793 AD). Bamburgh Castle was the Anglo-Saxon stronghold of Northumbria.  The site had been used by local kings for over 3,000 years.  It’s in a really great defensive spot so duh they would keep living there.

Just being able to see both of those sites from a distance was incredible.  It really put the early medieval world in perspective.  The early medieval world was dominated by a tight connection between the Church and State.  Under Divine Right, a King was ordained by God and then it was the King chose who he wanted to represent God to his people.  Basically, a King picked the high ranking Church clergy.  This tight connection is very clearly illustrated by the proximity of Lindisfarne (the Church) to Bamburgh (the State).

Story time: in the 7th century, a guy called Oswald was king of Northumbria.  He lived in/around Bamburgh.  He was also king during a time of sorta civil war in Northumbria when the previously united kingdoms of Bernicia and Deira had broken up.  The Venerable Bede, a later 8th century historian raves about Oswald.  Anyway, Oswald was able to reunite the kingdoms of Bernicia and Deira, thus ending the sorta civil war.  He pretty much became the most powerful king in the Anglo-Saxon Heptarchy (the seven main kingdoms in Anglo-Saxon England).  He also reintroduced Christianity/established a new form of ‘Celtic Christianity’ in Northumbria.  How?  He invited St. Aiden an Irish monk from Iona to come and establish a new monastery … on Lindisfarne.  The island allowed for semi-independence for Aiden to establish his new monastery but it was still close enough to Oswald and the seat of political power.  Over time, Oswald and Aiden formed a tight partnership and secured both the political and religious stability of the region, because truthfully in the EMP (early medieval period) one had to secure both the loyalty of one’s people and the devotion of their beliefs.

Anyway, that’s a quick overview.  I probably got some stuff wrong, oh well.  Here’s a map to show how close they were.  I was climbing near Belford (right off the A1). 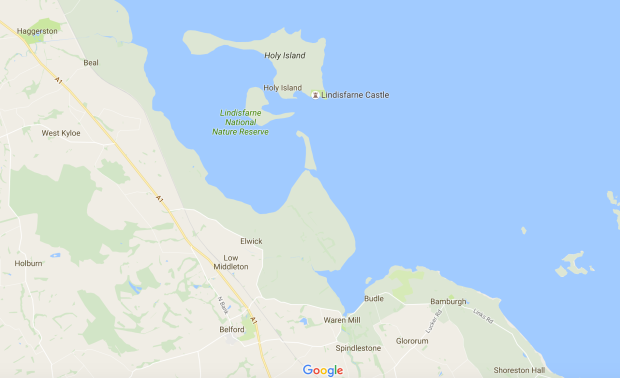 The rest of the week I’m researching for my upcoming essays and then this weekend I’m headed back to England for a weekend of camping in the Lakes District.  I’m really excited for this weekend, it’ll be nice to get of the city for the weekend.  The weather look excellent too.  I’ll also be taking a trad climbing course (I’ll learn how to place protective gear so I can then start leading trad routes).

Other than that, I guess it’s been pretty relaxed here.  I’ve fallen into a schedule that usually starts around 9.30 am because the blasted sun comes pouring in through my windows and makes it impossible to get anymore sleep.  I’m still knitting my blanket and it’s taking forever.  I’ve picked back up writing my 2nd novel and it’s also taking forever.  I’ve started listening to Christmas music because it makes me happy (I’m listening to Christmas music right now btw).

Edinburgh is starting to embrace the Halloween season, especially since it’s one of most haunted cities in Europe.  They’ve almost got the grandstands down off the Castle esplanade so I can finally go and enjoy one of my favourite views of the city.  The Meadows are changing colors and I can finally wear my jackets and scarves.

And that’s about it.  I wouldn’t say things around here have been too complicated.  I just do what I need to do for class and what makes me happy.

2 thoughts on “what i’ve been up to and some history.”