Hello all and happy New Year!  I hope you all spent the death of 2k16 in a suitable fashion (may it die and never return).  I returned to a nice sunny Edinburgh to find my bike had been stolen!

I just got back from the EUMC Bothy in Kintail.  As Bothy Apprentice (Padawan) I was tasked with planning the Hogmanay trip.  So, after a few month of raising the psyche, talking with drivers, and figuring out the logistics of the trip… we departed early on the morning of the 31st.

The Bothy is located pretty far north just about twenty minutes from Skye in a really beautiful location.  After about a four hour drive we pulled over in Pitlochry for lunch and any supplies we forgot back in Edinburgh.  I picked up four bags of bacon because I was stupid and forgot the most important piece of kit.  Then it was another hour and half to the Bothy.  We parked the cars outside of the National Trust huts and walked our kit up the 6km track.  It had rained heavy the day before, so everything was pretty flooded and muddy.  I decided to walk the track in my wellies which proved to be a pretty smart move. 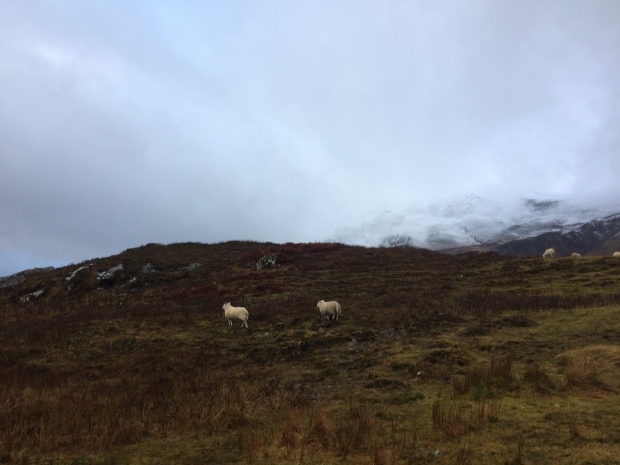 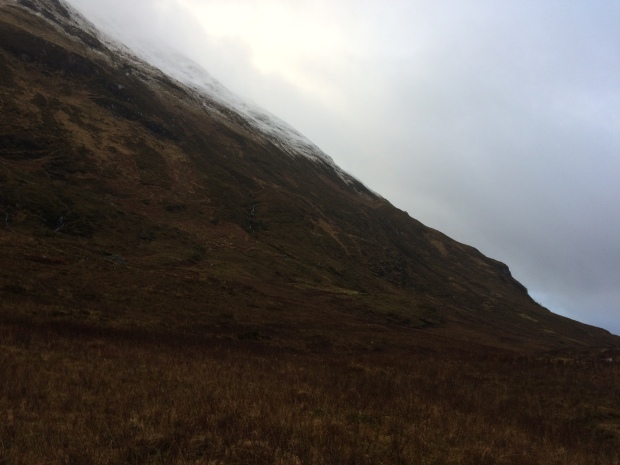 The car I rode up in, driven by my friend Shona, had decided to leave quite early that morning, around 8 AM, to give us enough time to get to the Bothy before sunset and get everything sorted for the rest of the people arriving.  We arrived at the Bothy around 3 PM. We all chose the best spots, started a fire, cracked out the drinks, and waited for the rest of our group.  I grabbed the single spot by the stairs which normally goes to the Bothy Sec, so I was able to spread my kit out for the next four days.  I also got to use the new sleeping bag I bought with the Cotswold gift card my parents got for me for Christmas, so thanks Mom and Dad!

About an hour or so later, more people began to arrive and after settling in joined us all downstairs in the living room next to the fire.  The Bothy is small, but not super small.  It’s got two decent sized rooms on the ground floor, a central stair, and two side rooms on the first floor.  With the fire going, the place gets quite warm.

Around 7ish, everyone started to cook dinner and continued to sit around and chat, drink, and listen to music.  The weather had gotten better since the afternoon and it had stopped raining.  By 10ish, the party had gotten into full swing with drinks, singing, music, and even some ceilidh dancing.

Tuva, Erling, and I brought out the mead we had been homebrewing in the flat closet and it was a great hit.  For those unaware, mead is a medieval beverage made from fermented honey.  It’s been documented throughout history from ancient Mesopotamia to Norse myths.  We followed a modified medieval recipe back in October, and set the mead to do its thing for the next three months (pictures below).  It turned out really well and we’ve got plans to increase our mead production for future Mountaineering events. 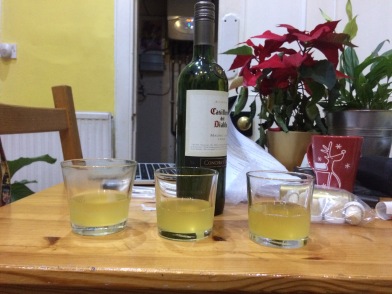 And, then things got a bit fuzzy.  Truthfully, I had been drinking pretty steadily all afternoon so it really hadn’t hit me until I started being spun really fast in the dark with everyone else’s head-torches spinning around me.  I was pretty confused but laughing and having a great time.

The stars so visible that night.  You could see the Milky Way and pick out the individual stars of the Pleiades.  I remember breaking out my GPS star app to check out which constellations were out.  But, I was probably also drunk and raving about how much I love space.

Everyone returned back into the Bothy after a while and the party carried on until 3 AM or so.  Quite tired, I fell asleep quickly.  The next morning I slept in pretty late until 11 AM.  Combining the jet-lag from the flight back from America just the day before and the long festivities the night before, I was quite tired.  I spend the rest of the day cooking up bacon, reading a book, and taking a hike up to the Waterfalls.  The weather was really amazing on New Years Day and I really enjoyed just taking the time to relax and enjoy being out at the Bothy.

It allowed me to refocus on this coming year and figure out what my plan of attack is going to be for the semester.  I’ve set goals to increase the number of firsts I get on papers and read even more for class.  I also want to get more into kickboxing and go out climbing a bit more.

The next day was rainier and the fog sat pretty low in the valley.  A group of us walked back down the track and drove to Eilean Donan Castle, just fifteen minutes down the A87.  The castle dated to the early 13c and had been part of the Lordship of the Isles, the seafaring kingdom of Western Scotland.  It continued to be a prominent place until it’s destruction in the 18c as it had been a place of Jacobite support.  The castle was rebuilt in the 20c.

On the way to the castle we had spotted the ruins of an old kirk and a graveyard, so we stopped to check that out.  It was pretty neat with some cool old headstones dating to the 1870s.  The sign at the kirk said that the kirk itself could date two centuries earlier.

From there, we drove back toward the Bothy and stopped the Kintail Lodge for lunch.  The group of us sat around, ate hot food and played cards.  About four we headed back to park the car and then walked back up the track to the Bothy.  We sang some songs to pass the 6km.

The evening, was again spend around the fire with friends, food, drinks, and singing.  Before bed, I had gone out to the bathroom and nearly got attacked by a feral sheep so that was terrifying.

The next morning everyone packed up to go and we rolled out in cars around 2 PM.  I got back to Edinburgh later that night smelly from not showering in four days and covered in mud… but quite happy.  Everything went really well over the four days which I was really happy about, for the first big trip that I’ve planned and put together, I thought it went really well.

Today, I spent the day in the flat cleaning kit and organising the hall closet into a kit closet so everyone’s boots, sleeping bags, roll mats, and tents fit nicely inside.  I also sorted out some banking stuff.  Being an introvert, my social battery had been pretty drained from being around people constantly and I needed some time to myself to recharge.  This Sunday, I am super excited to be heading down to London to meet up with Ellie, Sophie, and Caitlin.  Ellie and Caitlin are from London and will be giving me the local tour.

So, that’s about all for now.  Term officially started back up on the 16th and I’ll be hitting the ground running with courses in Archaeology, Roman History, and Medieval History!

✨do you have a favorite fairytale or myth?✨⁣
✨category is: ya fantasy where the girl saves herself (and her world)✨⁣
✨so excited to help promote the A FAR WILDER MAGIC by @allisonhsaft preorder campaign! the book is released 8 march 2022✨⁣