*smiles into the void* // photo @tuvaod

Last night I got home and scratched another country off my scratch world map.  Tuva, Erling, and I spend the last week in Oslo the capital of Norway visiting museums, going skiing, and eating lots of fish.

For those who don’t know Tuva and Erling are two of my three flatmates.  They are both Norwegian and grew up in Oslo.  They are childhood friends with Anna and Elsa.  And, they very kindly and graciously invited me to come back to Norway with them over this year’s  week in February with no classes.

The week was amazing.  I’ve never been to Norway, I didn’t really know what to expect, so I sort of just went with the flow.  I knew I wanted to see the ‘Scream’ and the Viking Ships but beyond that I was happy to hang out and see the places Tuva and Erling knew best.  Which I do think is one of the best ways to travel.

The first full day we went to the National Gallery to see the paintings.  I got surprised by a real and true painting by my girl, Artemisia Gentileschi, an absolute baller female baroque painter.  Tears were shed. 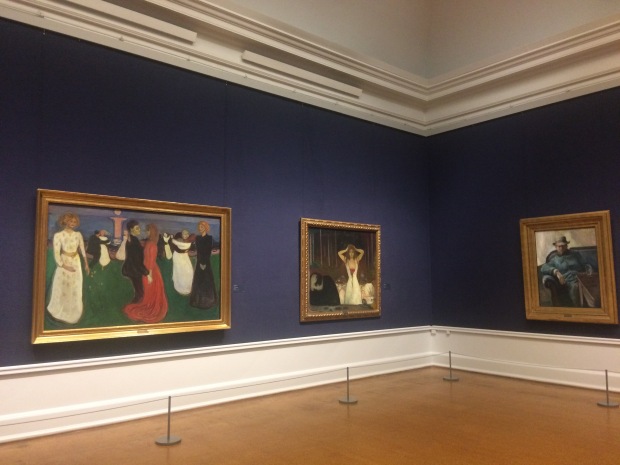 After the museum, we went to a coffee shop near to where Erling’s brother went to high school and where they all spend a good amount of time in their teens.  It was very Scandi and hip and everything they say about Scandinavia I can confirm as true.  But, jokes aside, going to places of importance to the people you are with is one of the best ways of seeing the character of the city.  Cities are massive and you’re never going to see everything, but you can see the places that mean something to the people you are with.  It makes the place come alive a lot more than just ticking off the ‘Top Ten.’

The next day, Tuva worked on an essay for uni and Erling and I went to the Viking Ship Museum.  We walked there from Tuva’s flat.  The museum was purpose built for three viking ships uncovered in Oslo in the 19/20c.  The most famous of the ships is the Osberg Ship.

Seeing the ships was such a surreal experience.  I know I say this a lot, but as a kiddo growing up in the middle of the USofA interested in European History, there isn’t much to do except for read.  And, I read a lot.  I didn’t live near to massive American museums like the Metropolitan Museum of Art in New York or the Smithsonians in DC so I didn’t have opportunities to see things in real life.  Looking at pictures online or in books was what I had.  So when I see something I’ve read so much about I do tend to tear up, it’s like finally meeting an old friend you’ve only talked to in letters.  I spent so much time studying and wishing I could see things… that when I do, I get overwhelmed.   When I see artifacts in real life I always learn something new.  The ships were bigger than I thought.  The wood was darker.  The carvings more intricate.

That evening the three of us saw Black Panther in the Oslo cinema.  The film was amazing and I want to go see it again.

On the third day, we went cross country skiing.  Oslo has a green belt around the city full of forests and ski tracks.  This was the second time I have gone cross country skiing and I think I loved it even more.  My knees didn’t hurt at all, I got to see some fantastic scenery, and got to ski on parts of the World Cup course (and didn’t die).  Not a bad day out.  We stopped twice during the day at two different mountain huts.  The huts were started from the old summer farmsteads for cattle in the mountains but now are places to stop and get food, water, etc.  The ones we stopped at were very traditionally Norwegian and were made of wood with all kinds of funky old mountain and ski gear inside.  They serve cinnamon rolls and waffles.  I got a cinnamon roll and cried because I love cinnamon rolls so much.

The second hut was pretty much the only part of the day I really truly struggled.  Tuva and Erling abandoned me and I got stuck in a snow drift.  Tuva went looking and found me crawling up the drift with my hands with my skis dragging behind me.  Eventful.  All in all, however, I would 11/10 do it again.  Each hill I went down I fell down less and less.  I properly face planted a few times (once after I got distracted because I saw a women being pulled on skis by a dalmatian!!!), but I managed to get up quickly.  I’m an American not an American’t afterall.

I left early yesterday to get back to Edinburgh and sort an assignment that is due Monday.  I had to do some stuff on the computer and didn’t want to leave it late because I don’t trust technology.  But, I had an amazing time.  Oslo is an amazing city, so thanks again Tuva and Erling (I know you’re reading this, either because you want to or because I made you #supportchagirl).

Classes resume soon, but the university is striking so I may have more free time.

2 thoughts on “neither this way nor(that)way”